Did Muggsy Bogues Dunk in the NBA?

Muggsy Bogues was more than just a novelty on the court. When he retired from the NBA, he ranked 13th in all-time assists in NBA history. Moreover, Muggsy was well known for his speed, agility, and defensive style of play.

However, at 5’3”, the icon goes down in history as the shortest man to ever play in the NBA. In a sport dominated by players well over 6 feet, Muggsy was able to hold his own. Yet, there was one thing lacking in Muggsy’s game.

In his entire 13-year player career, Muggsy never once dunked the ball during an official NBA game. Perhaps unsurprising when you consider his height, but it does beg the question — if he wanted to, could Muggsy Bogues dunk? 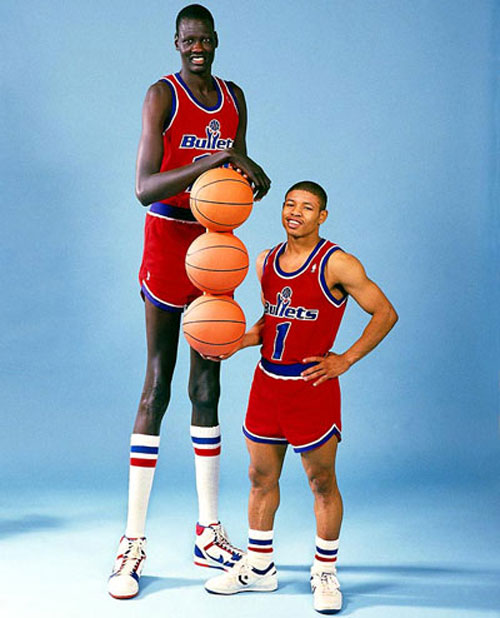 At Dunbar, Muggsy played the basketball team, the Poets, from 1981 to 1983. He exceeded expectations and was fundamental to his team's winning streak and excellent performance in their division league. His performances at the school made him famous, and before long, he was on the lists of many NBA scouts.

After high school, he went to Wake Forest University in 1983 on a basketball scholarship. In 1986, Muggsy went to Spain as a member of the American FIBA team.

When Muggsy graduated, his college team retired his jersey and number, given his extraordinary performance.

In 1987, Muggsy was drafted 12th overall by the Washington Bullets. Starting with his debut game, he quickly established himself as a leader in steals and assists.

Muggsy went on to plate for the Charlotte Hornets, Golden State Warriors, and eventually the Toronto Raptors. Throughout his career, he dominated in assists and became well-known as a formidable point guard despite his size.

Tyrone “Muggsy” Bogues was the shortest man in every game he played, but the opposition knew better than to underestimate him.

Once Muggsy gained possession of the ball, the opposition knew they were in for the long haul.

Agile and fast, Muggsy knew his height's advantage and wasn’t afraid to use it. He ran the offense like a king, ensuring the ball got to the right players. His pinpoint passes were famous. 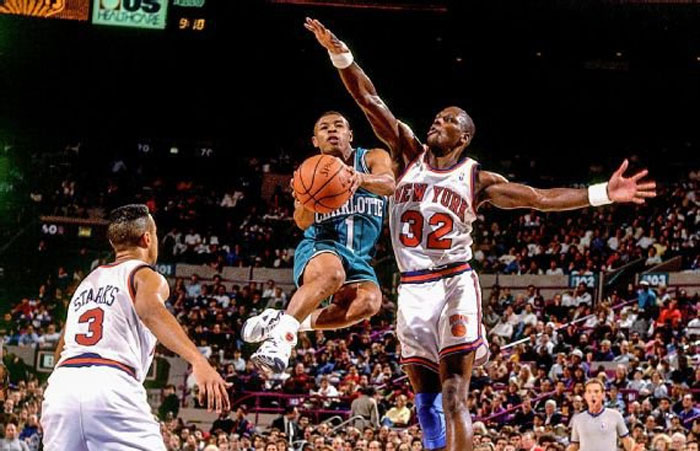 On defense, he guarded the perimeter, kept the pressure on the ball, and made ball possession difficult for opponents.

In an interview, a fellow point guard and former Hawks player, Doc Rivers, attested to the Muggsy defense prowess. He described how challenging it was to dribble because "by the time you put it down, you'd reach for it, but Muggsy had it and was gone."

Also, when asked about Muggsy Bogues, NBA legend Michael Jordan summed up his encounter with Muggsy in five words: "That little man was trouble.

Muggsy is of small stature but is reportedly capable of making a 44-inch vertical jump. Therefore, in theory, he would have been able to jump high enough to reach above the hoop and dunk the ball.

Secondly, Muggsy Bogues stated that he could dunk the ball on multiple occasions. For instance, in a Coach Mag interview, he said that he could, although he hadn't dunked officially in an NBA game. In 2000 with Chuck Swirsky, Muggsy mentioned dunking during his high school career.

But that’s not all. It may interest you to know that people other than Muggsy himself verified that he could dunk. Spectators in December 1990 admitted that they saw Muggsy dunk during the pre-game.

Furthermore, several of his fans are adamant that the basketball icon could dunk. According to one, he met Muggsy during the Hornet game at the coliseum for the 1991-1992 season. He claims the player dunked to show them that height is not a disadvantage.

Related: What is the Average NBA Players' Height?

Why Muggsy Didn't Dunk During an NBA Game

Real-time dunking in an actual game would be unnecessary for a player in a defensive position. In addition to being difficult, it's also energy-intensive and may turn counter-productive for his team.

Despite being the smallest man on the court, Muggsy played to his strengths. And because of this, he managed to earn respect in a court that was dominated by taller players.

By the mid-90s, he was so popular; he even starred in the 1996 film Space Jam. The player didn’t feel like he had anything to prove by performing a dunk during a game.

Who is the Shortest Player to Dunk the Ball?

Officially, the shortest NBA player to dunk is Spud Webb. Muggsy Bogues never dunked in an official game, so his height becomes a moot point.

Meanwhile, Webb, who is four inches taller than Muggsy, not only performed dunks during games but went on to win the NBA Slam Dunk Contest in 1986.

Despite speculation, Muggsy himself made the claim that he could dunk if he wanted to. His height has never held him back from anything he wanted to accomplish in basketball, and his career stats are a testament to that. The player has an incredible vertical jump, so even though he is short, he is more than capable of getting above the rim.

The story of Muggsy Bogues is an inspiring one, and it should motivate all the players who dream of reaching the big stage in basketball. Above all, Muggsy Bogues' dunk story can encourage generations of future basketball players, especially those with a shorter height.

Related: How Tall Do You Have To Be To Dunk a Basketball?